Vulvar Varicosities Can Be a Warning Sign of a Vascular Disorder

The presence of vulvar varicosities is not an easy topic to discuss with female patients. The condition can be a source of unnecessary anxiety and embarrassment. The good news is that there may be a permanent solution to these unsightly veins that the Center for Vascular Medicine (CVM) can offer in the outpatient setting.

What is Vulvar Varicosities?

Vulvar varicosities are dilated veins found in the labia majora and minora and are more common in pregnant women as opposed to the non-pregnant population. While as many as one in ten pregnant women experiences these troublesome veins, spontaneous improvement in the appearance of vulvar varicosities is typically seen within six to eight weeks post-partum. However, in some women, these dilated veins may never resolve and only worsen with time and further pregnancies. When persistent and symptomatic, they may present with the following:

Anatomically, normal veins of the vulva have a rich network of communicating branches with veins arising in the wall of the pelvis, which also communicates with the female organs. The venous drainage of the vulva is via the pudendal and perineal veins which then depend on the competence of the ovarian, iliac and great saphenous veins.

During pregnancy, the rise in estrogen and progesterone production causes venous dilatation. Furthermore, the increasing physical load of the enlarged uterus on the pelvic floor contributes to pelvic venous insufficiency and the resultant symptomatic varicosities. With each subsequent pregnancy, symptoms typically present earlier in the course of gestation and are more significant. The majority of varicose veins of the vulva are caused by reflux in the pelvic veins termed ovarian vein reflux and/or iliac vein reflux. Extension of varicosities into the medial thigh is also a common finding in patients with varicosities of the vulva. 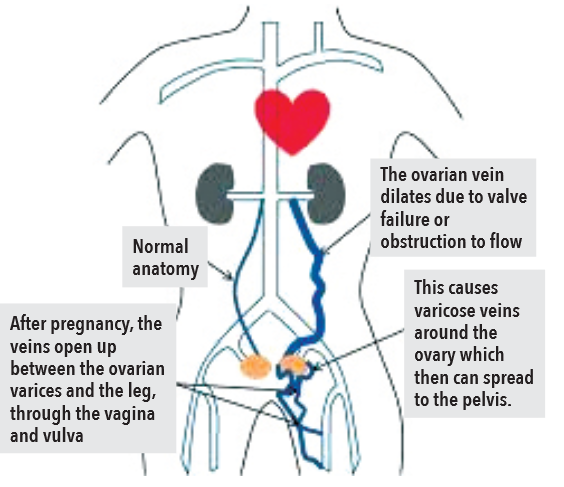 After a thorough history and physical, a painless transcutaneous pelvic venous duplex ultrasound is the method of choice for a non-invasive diagnostic evaluation of the pelvic and vulvar venous system. The symptomatic patient may then undergo further invasive evaluation including a venogram, where a contrast dye is injected into the veins under fluoroscopy.

With the diagnosis of ovarian vein reflux, a coil or chemical sclerosant can be placed selectively into the ovarian vein resulting in the closure of the vein with the eradication of reflux in this vessel.

Once the faulty pelvic vein is closed, the venous blood will be redirected naturally into the healthier veins and improve the pelvic venous drainage.

Following treatment of the pelvic venous insufficiency, the patient returns for a follow-up pelvic ultrasound at six weeks to evaluate her response to interventional therapy.

If the intervention has been successful, there is a resolution of the pelvic vein reflux by ultrasound and the vulvar varicose veins may begin to decrease in size.

A period of observation (six to twelve months) is typically warranted prior to moving on to sclerotherapy as many vulvar varicosities will improve significantly after the cor-rection of the pelvic vein reflux. When indicated, sclerotherapy may be injected either directly into the vulvar varicose veins or under ultrasound guidance pending their visibility.

Many women are hesitant to initiate a conversation on vulvar varicosities. This issue is often discovered in the course of discussing symptoms of pelvic pain, pelvic congestion syndrome, or varicosities of the legs. Creating awareness is vital in order to properly direct a woman's evaluation and treatment. As with venous insufficiency and varicosities of the lower extremities, this is a medical problem, not simply a cosmetic concern. Presenting the condition in such a manner can reassure a patient that her issue is not simply an embarrassment, but a medical disorder that warrants attention.

Vulvar varicosities can be a major warning sign of Pelvic Congestion Syndrome. Other factors must be considered as explained by Dr. Pappas in the video below.