Posted November 13, 2019
We are pleased to announce that the Center for Vascular Medicine Prince Fredrick location has been granted a three-year term of accreditation in Vascular Testing in the areas of Peripheral Arterial Testing by the Intersocietal Accreditation Commission (IAC).

What Vascular Testing Accreditation Means For You 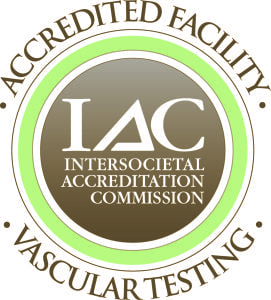 To earn accreditation by the IAC, Center for Vascular Medicine Prince Fredrick underwent a thorough review of its operational and technical components by a panel of experts. The IAC grants accreditation only to those facilities that are found to be providing quality patient care, in compliance with national standards through a comprehensive application process including detailed case study review. Patients can rely on IAC accreditation as a “seal of approval”, indicating that a facility has been carefully critiqued on all aspects of its operations considered relevant by medical experts in the field of Vascular Testing. When scheduled for a Vascular Testing procedure, patients are encouraged to inquire as to the accreditation status of the facility where their examination will be performed and can learn more by visiting www.intersocietal.org/vascular/main/patients.htm.

Why Is Vascular Testing Important?

Heart disease is the number one cause of death in the United States. It is estimated that one American dies every 39 seconds because of cardiovascular disease. There are nearly 800 thousand new cases of stroke, a disorder of the blood supply to the brain, each year - making it the leading cause of disability and third leading cause of death in the United States. The American Heart Association reports that the total cost of cardiovascular disease and stroke (direct and indirect) in the United States for 2010 was an estimated $503 billion. With the use of outpatient vascular testing procedures, like those offered by Center for Vascular Medicine, those numbers can be reduced. While these tests are helpful, there are many facets that contribute to an accurate diagnosis based on Vascular Testing. The skill of the technologist performing the examination, the type of equipment used, the background and knowledge of the interpreting physician and quality assurance measures are each critical to quality patient testing. IAC accreditation is widely respected within the medical community, as illustrated by the support of the national medical societies related to Vascular Testing, which include physicians, technologists and sonographers. Vascular Testing accreditation is required in some states and regions by the Centers for Medicare and Medicaid Services (CMS) and by some private insurers. However, patients should remain vigilant in making sure that their Vascular Testing procedures are performed within accredited facilities, because for many facilities it remains a voluntary process.
Back to Main   |  Share
Tags
Accredited Vascular Testing Center
Maryland
Prince Frederick