May-Thurner Syndrome, also commonly known as iliac vein compression is an overlooked diagnosis that poses as an anatomical risk factor for deep venous thrombosis of the lower extremity.

This rare condition was described by May and Thurner in 1957 as compression of the left common iliac vein by the contralateral right common iliac artery against the posterior fifth lumbar vertebral body resulting in venous outflow obstruction.

DVT is more common in women and 72% of women diagnosed with May-Thurner Syndrome are relatively young between the ages of 20 and 50 years. The three stages of untreated iliac venous compression are characterized as an initial asymptomatic phase to gradual venous spur and fibrous shelf formation within the walls of the vein with an increased disposition to DVT, which can eventually progress to deep vein thrombosis of the lower extremity.

One of the reasons for the under-diagnosis of this condition is thought to be the prevalence of other more recognizable risk factors for DVT in legs. Oftentimes no further workup is pursued once an identifiable cause of DVT is recognized. 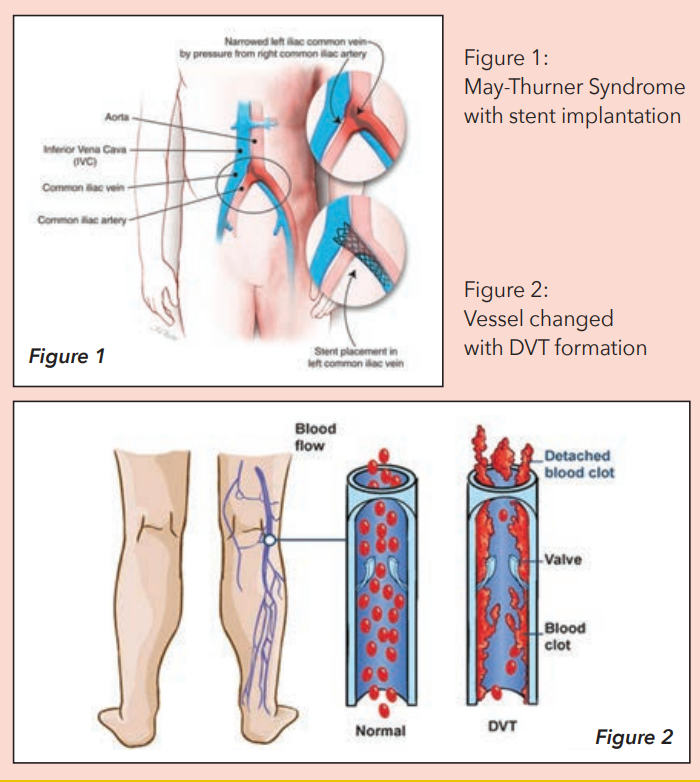 After a thorough history and physical exam, the diagnostic work-up includes non-invasive duplex ultrasonography of the abdominal and pelvic area as the initial test.

The gold standard is minimally invasive venography with the utilization of intravascular ultrasound (IVUS) which further delineates the location and extent of compression and/or obstruction. Treatment of DVT (blood clot) associated with May-Thurner Syndrome involves catheter-directed thrombolysis, then a venoplasty (balloon) and venous stenting. This can safely be performed in the outpatient setting such as CVM.

The Center for Vascular Medicine has state-of-the-art technology, along with an independent medical research facility to determine the best treatment options for women suffering from chronic pelvic pain of vascular origin. The doctors use minimally-invasive procedures to treat patients suffering from the disorder. No open surgeries necessary and no hospital stays. Patients can go back to work the next day.