Case Study: Pelvic Pain and Congestion in a Post-menopausal Female

Clinical manifestations Pelvic Congestion Syndrome is characterized by pelvic pain of at least six months duration. We will describe post-menopausal women who showed symptoms of pelvic pain of a vascular origin. This type of pain often first manifests during or after pregnancy and worsens with subsequent pregnancies. The pain varies in severity, but is usually described as a dull ache or heaviness that increases around the menstrual cycle; with prolonged standing, postural changes, walking, or activities that increase intraabdominal pressure; and after intercourse (postcoital ache).

It is usually unilateral but can be bilateral or shift from one side to the other. The patient may also complain of sharp exacerbations of pain, dysmenorrhea, deep dyspareunia, and urinary urgency. Gluteal, vulvar, and/or thigh varicose veins may also be present.

It primarily affects women who had multiple pregnancies in the reproductive age group. The prevalence of PCS is up to 30 percent in patients presenting with chronic pelvic pain in whom no other obvious pathology can be found.

By the time the 55-year-old patient presented to our office, she had had evaluations done by her Gynecologist, Urologist and Uro-gynecologist. Also had a GI evaluation done with Colonoscopy and polypectomy without relief of her symptoms. It is very common for women to visit multiple specialists before linking their pelvic pain to a vascular problem.

This is why the Center for Vascular Medicine's team developed this website to educate patients and seek the correct specialist based on their symptoms. After making the appointment, the vascular specialist completes a comprehensive questionnaire and a noninvasive transabdominal ultrasound before going to minimally-invasive diagnostic procedures. This way the providers can be sure that the pelvic pain is of a vascular origin.

Dr. Lakhanpal performed a venoplasty of the left common iliac vein extending to the inferior vena cava was performed and a stent was placed extending from the inferior vena cava across the common iliac vein to the left external iliac vein, restoring normal diameter. The venogram revealed brisk flow through the newly stented veins and almost complete disappearance of the left internal iliac collaterals.

During a one-week follow-up visit, she reported that her pelvic pain and left thigh pain had improved. At her six-week follow-up visit, she remained pain-free and the ultrasound documented that the stent was working properly. She reported that in addition to having no recurrence of her thigh or pelvic pain in her telehealth appointment and she had no further recurrence of varicose veins in her legs.

She was extremely happy with the outcome of her procedure. The pictures below show her venogram (picture of her veins). This is how the physician can see proper blood flow through her pelvic veins. 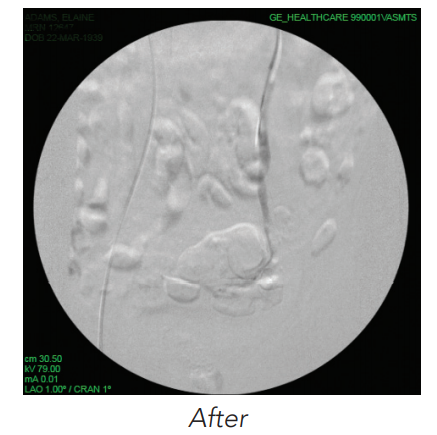