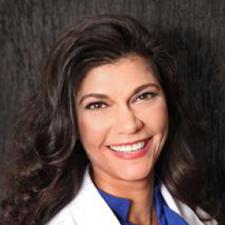 Island and raised in Dayton Ohio, Dr. Deol moved to Michigan to get her BA from Albion College in 1990, and MD from Michigan State University in 1994.  She completed her general surgery internship at The Cleveland Clinic in Ohio in 1995, and then a six-year general surgery residency at William Beaumont Hospital in Royal Oak in 2001, and became board certified by the American Board of Surgery in 2002.  Dr. Deol went on to sub-specialize in laparoscopic bariatric surgery by completing a Fellowship at Loyola University Medical Center in Chicago. After 7 years as a bariatric surgeon, she eventually devoted her entire career to the treatment of venous disease, and became board certified in Venous and Lymphatic Medicine (AVBLM.)

Dr. Deol has become an integral part of the venous academic world and serves on the American Vein and Lymphatic Society (AVLS) Healthcare Policy Advisory Committee, as well as chairing their membership retention committee, and serving on their International Committee.  Additionally, Dr. Deol serves on the American Venous Forum (AVF) Website and Social Media Committee and their Membership Committee. She is also a diplomat of the American Board of Venous and Lymphatic Medicine.

Dr. Deol cares for the hard-working residents of Detroit and Toledo by providing leg health screening and education to corporations such as: BP, GM, and FCA. It is her goal to educate employers about the benefits of compression stocking use in the workplace, and the importance of screening and early detection of venous disease to prevent the development of venous stasis ulcers and lost workdays.